Derby Hill, Parr
Gary Weir and Paul Mangan have moved their community organising activities to the Derby Hill area of Parr
We have had a great time and made a lot of friends in our first six months of community organising on the Common Estate. In order to more fully explore the opportunities that Community Organising can bring to areas and to show that the process can be applied widely, we are taking the  second six months to work with the community in Parr
We would hope that we maintain and continue to support where we can, those projects up and running in our previous area and we can still be contacted on the telephone and email contacts. In addition we have already started a round of listening to residents of Derby Hill and have a some projects in the pipeline.
Check back  on our updates pages in the next weeks to see the work we have been undertaking in Derby Hill as well as a summary of the great things that have been achieved by individuals and groups who have put themselves forward and taken charge of projects to benefit their community 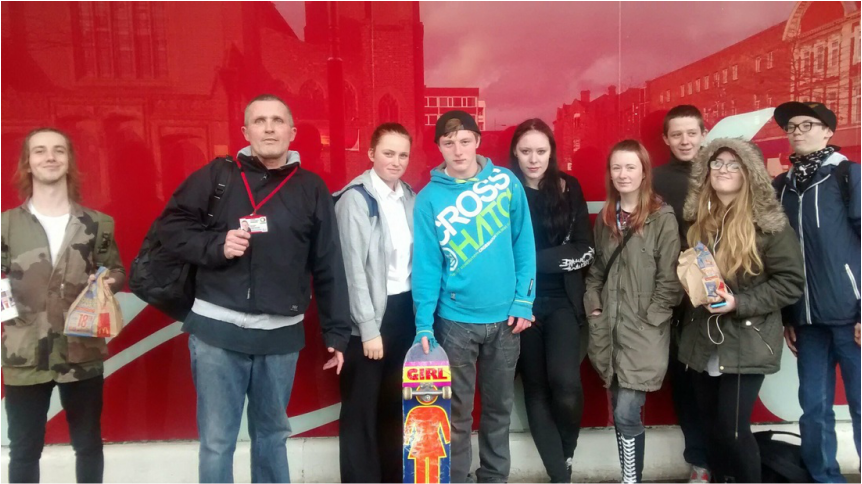 One of the groups who feel that they are simply ignored,  or perhaps not understood,  locally are  younger people who meet up to skateboard.
They have been doing this on what they describe as 'the only place that we can do it' outside the Parish church. This has led to some tensions. So,  in order to see what can be done,  a series of listenings have been taking place  . More on this as it develops.
PRESS INTEREST  IN THE SKATEBOARD PROJECT
The issue of skateboarding , and perhaps scapegoating has been taken up but the local press as this cutting from the St Helens Star explains 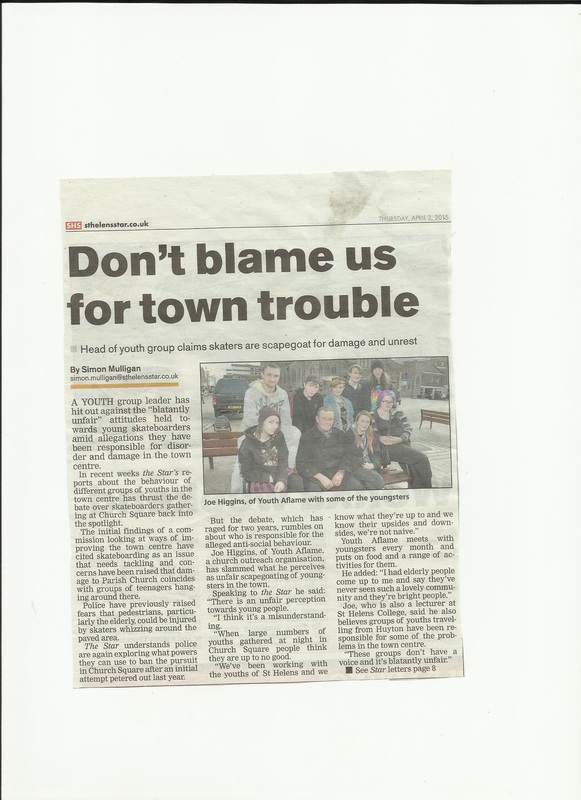 After a housemeeting, a local organisation  has come into the project. Youth Aflame based nearby  has offered meeting rooms and put on a buffet mean  for those interested in finding out more, or putting points of view forward for and against the idea of boarding  at the present location. The meeting  was the first time some had been given a chance to have their say in anything like a formal setting. 'It was great suddenly to think that what we were saying was being listened to, I'm really made up  that we got involved' was the reaction of one of the group.
The discussion allowed a lot of listening opportunities and rather than try to  make it formal,  the meeting was held in a sports centre. 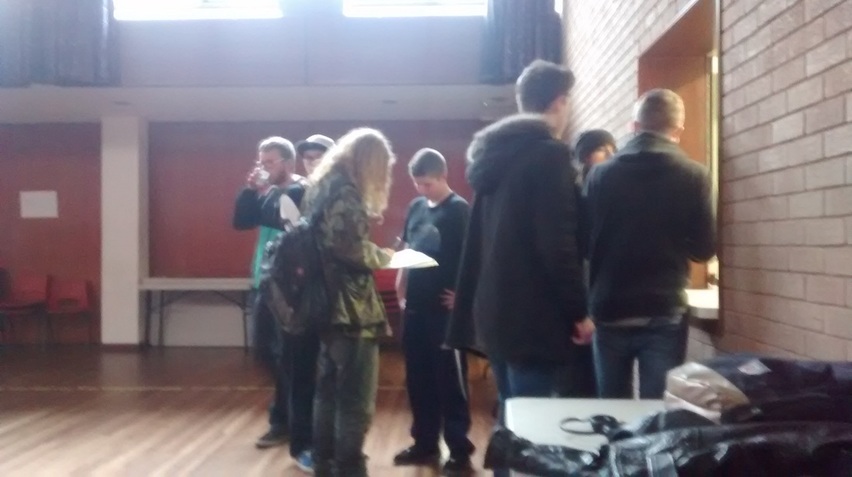 'Planning to have a laugh' 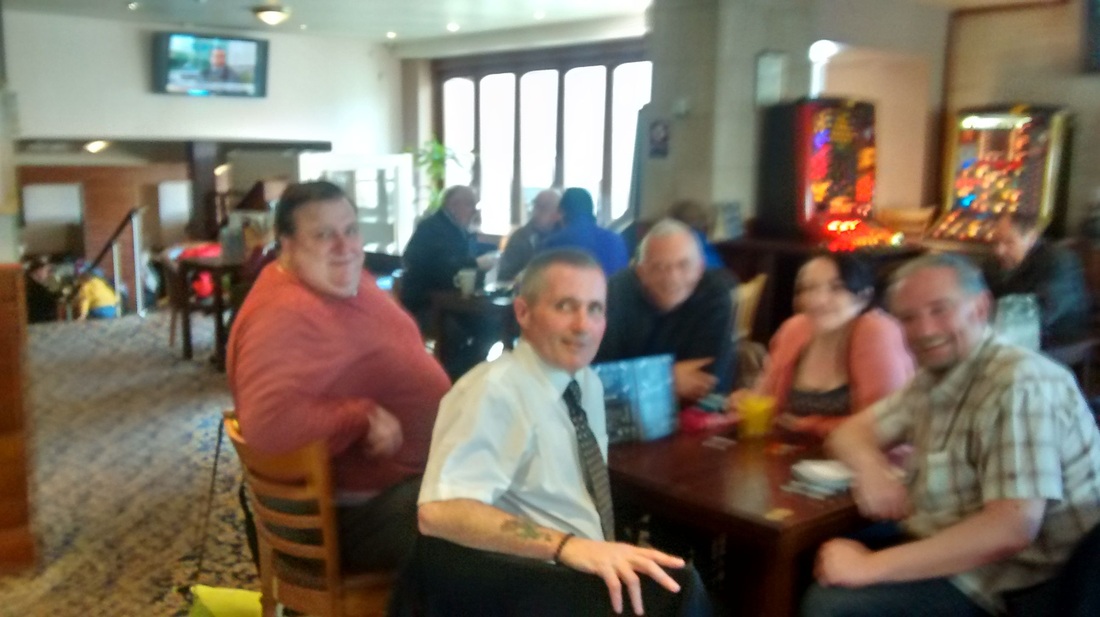 'Planning to have a laugh'
The group of 'would be comedians' of the starfish project have now sorted out a regular stand up event at a local pub
This is one of the project planning meetings . 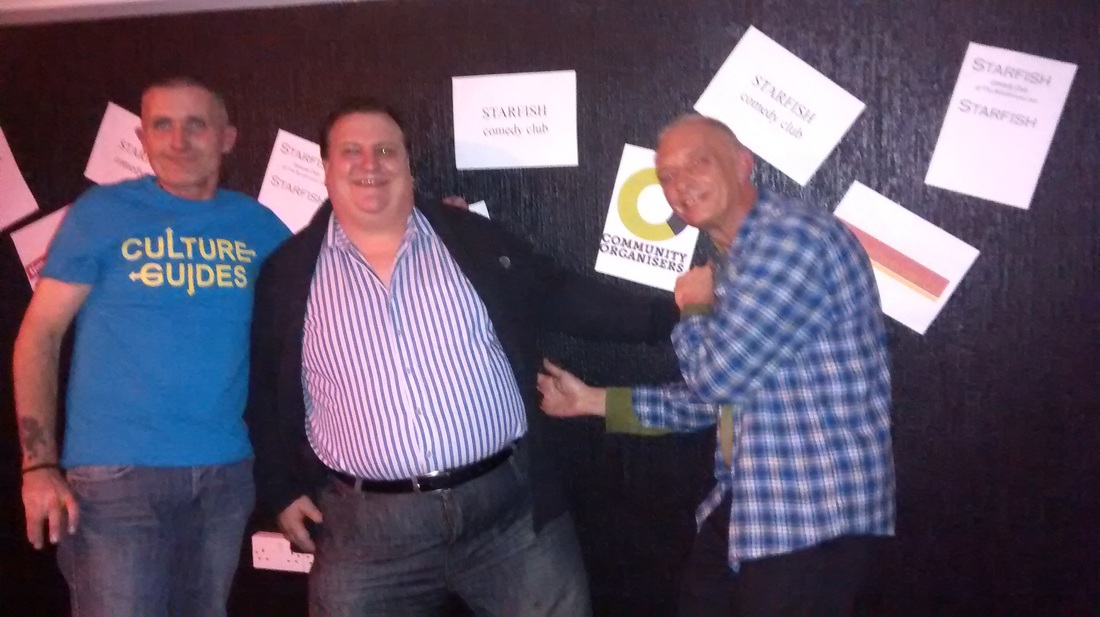 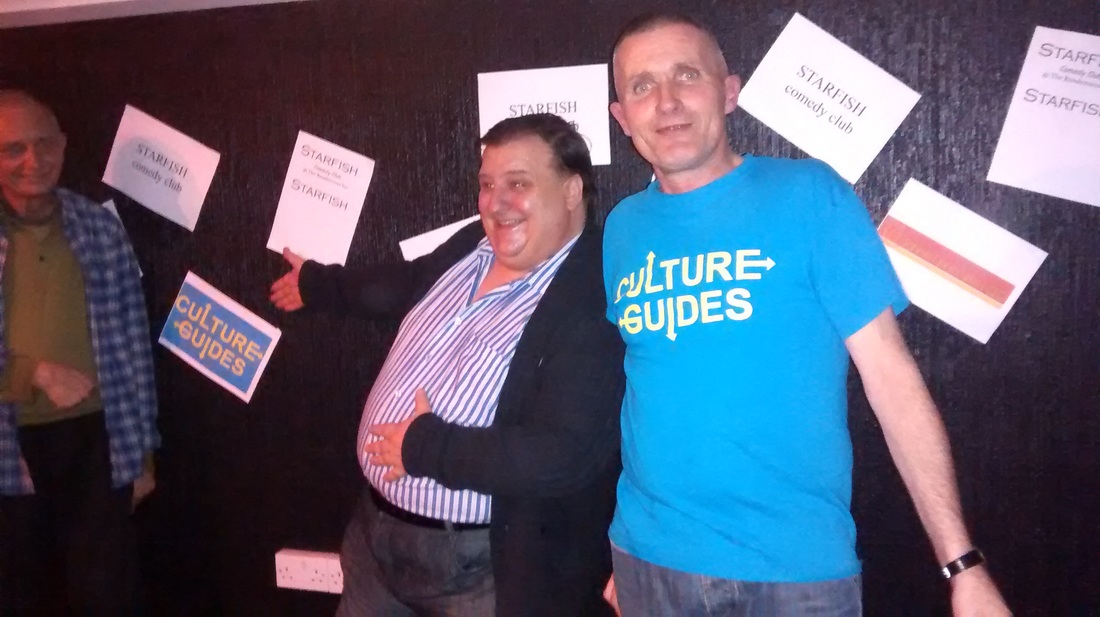 Street Homeless Project
The voices of all members of the community are important. Perhaps the most side lined and neglected are those who have fallen through the various safety nets and are,  either through choice or hardship, living rough. We have begun a series of meetings and enagements with street homeless people in the area.  Due to the sensitive nature of the personal information, we publish only a couple of portraits of people who have expressed a desire to have themselves  photographed. 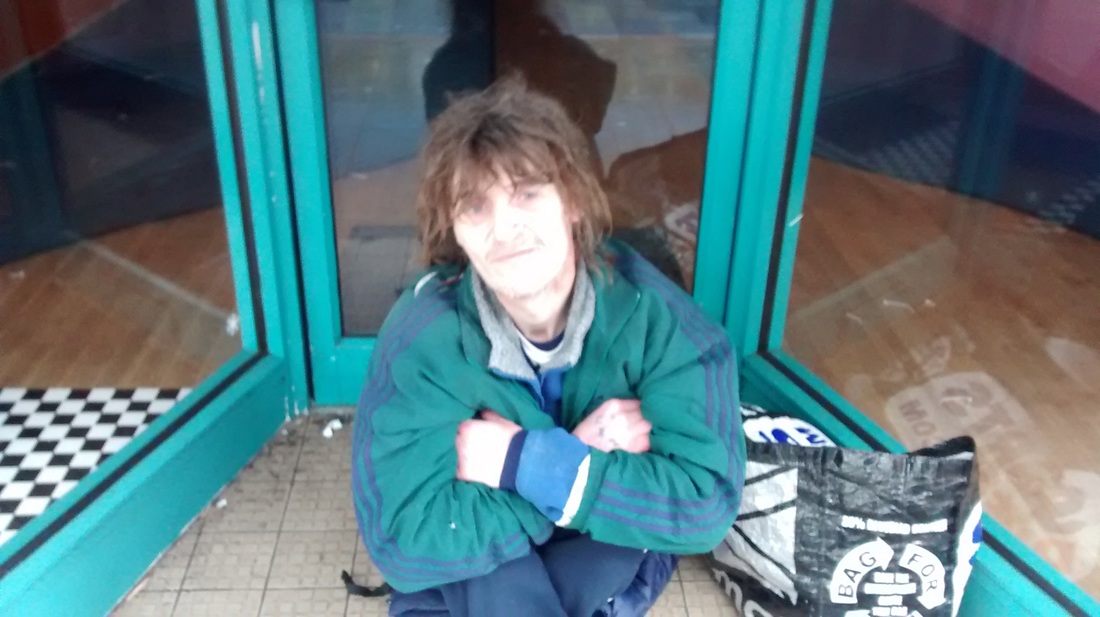 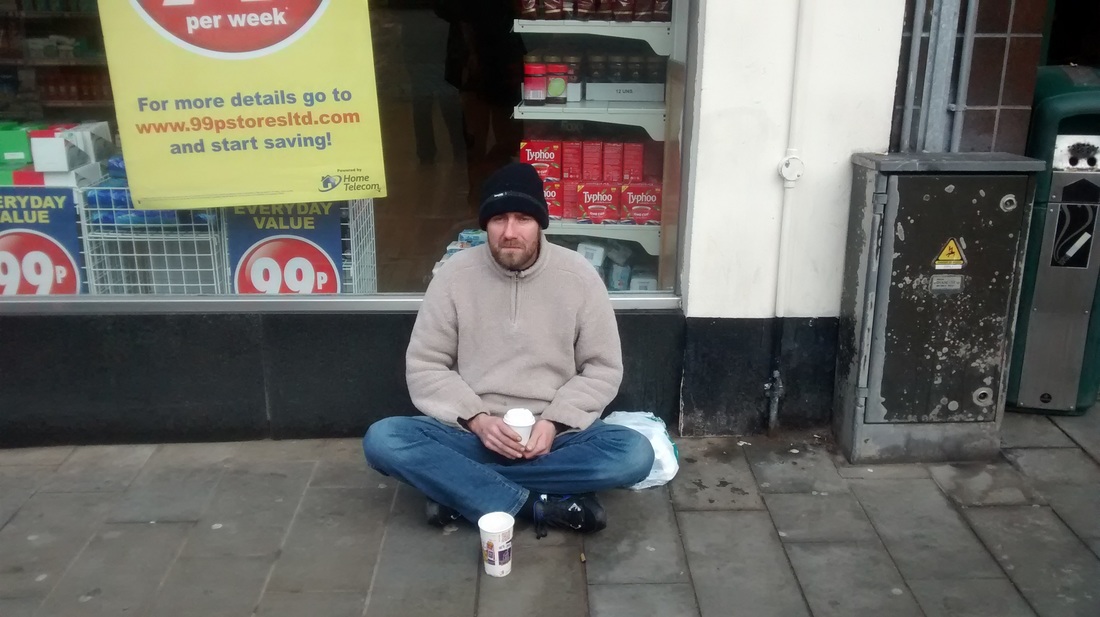 Active Citizenship Project
It became apparent during a number of listenings with members of the Homeless  project that a significant number had not  understood that they would still be able to register to vote in the General Election.  The reasons varied to  those who thought that there would be no point, to those who simply had not realised that they would be eligible to vote so long as they registered.  Naturally for this group the problem of an address  that they could be registered against  caused some difficulties, but following a meeting of the group, hosted at a local cafe,  it was agreed that two members of the group would find  places or organisations willing to provide  care of addresses. This has led to  several people  now registered to vote. We have also been having a number of 'whats the point' meetings  to encourage a more active take up of the scheme. Registration for the General election closed in late April, but the scheme will  remain active throughout the year, enabling  this most disadvantaged of groups the opportunity to participate in the democratic process.
SPIN OFF PROJECT
As a result of the meetings a number of people have  found also that they  are able to get an email address that can help them n their applications for benefits but also as a way of engaging in other ways through the use of a technology that they thought  they would not be able to access. Following on from out Digital organiser option. Gary and Paul have been able to help  show people with an interest how to sign up for gmail addresses and how to access their accounts from public libraries.

Ideas into action, overcoming apathy, some lessons from our projects

Our section of the presentation deals with what we have found to be one of the biggest potential blocks to practice as a community organiser, apathy.

There can be a danger in seeing door after door opened, or not opened by people who when being listened to, may well come up with a few things about where they live that they would like to see improved or changed, but that they themselves feel powerless to do anything about, or, that ‘they’ whoever they are should do ‘something’.

We wanted to show some results from three of our projects that have involved working with groups of individuals who we each have thought ‘this is going to go nowhere’ and that through learning some of the lessons brought up through the programme and our reflection on how to tackle issues in slightly different ways, have, we feel shown that it is possible to overcome apathy by tackling the barriers that people feel are preventing them from achieving the goals they actually want to set.

Some may remember this TED talk, video by Dave Maslin, which looked at whether apathy was real or a realistic response to almost deliberate blocks that are put in the way of individuals and communities to prevent change from taking place

“Intentional Exclusion”  Maslin argued that  far from being apathetic,  people were in fact very interested in their circumstances but  rarely  had the chance to question whether things  had to be the way they were  until they were directly confronted with  t being asked what could be changed for the better,  why it would be of benefit and who  had the ability (including themselves) to actually bring the change about. His point was that often all that was needed was a spark or catalyst to get the process going

Making a difference with individuals and groups

We looked for this presentation at three of our projects that centre on people who have been in the past described as powerless, apathetic, and literally disenfranchised

What have they in common?

At first sight perhaps not a great deal

However, at our group meetings we realised that in fact there was a unifying link between these groups. Each felt that  they had a problem or issue that no one else wither understood or cared about  AND  that  basically all that they could do was to ‘put up’ with things as they were because  no one else   wanted to know.

From a series of listenings with people who identified themselves as being socially isolated, again we found that there was a common theme emerging One of being made to feel valueless, and in the words of one particular man ‘washed up’

A solution that came from a number of people who had identified as isolated was that they would like to have an opportunity to meet up with others in similar situations. Without going into the whole process of how this was brought about, a small group was formed which meant that a coffee morning group was formed by members who then invited others along to it

The group gave itself the name ‘Starfish’ on the basis of a poem that one of them had read, and this next slide became a motivation for us in a lot of other work we have since undertaken

The image of the starfish seemed to us to be a key to how to look at so called problem groups, to look beyond the mass of problems and focus on the individuals and their own aspirations

St Helens is an urban town long in decline,  the centre of the town is mainly deserted apart from shops  with little in the way of activity for younger people who don’t fit in to the more organised  youth groups/

What we found from looking at the listenings was that this group of young people felt again that no one cared, no one understood and that all they were was a nuisance. Local shopkeepers and council officials basically wanted them not to be there, and this was leading to resentments, which in turn had the young people being labelled as ‘trouble makers’.

Through further listenings with what could be considered to be people on the other side of the issue, local church leaders, local shop keepers and shopping centre managers, we have been able to help start a dialogue that simply would not have happened.

The third example we wanted to share with you was a group that is still in its very early days   and came about again as a result of listening to people who  often feel themselves to be overlooked  and in many ways don’t see themselves as being members of any  particular group,

We were listening to a man who was sat in a shop doorway, who told us he was street homeless. When we asked the question about voting he told us categorically that he was not allowed to even though he would like to.

Listening to other people in a similar situation it became apparent that far from being apathetic, or uninterested, there was a problem of knowledge of how to go about actually registering to vote.

Through a discussion  in a local shelter that caters  for homeless people it was discovered that so long as people could provide a suitable address and register in time , that there was not actually any reason  as to why people in this situation should not be entitled to a vote.

So as a result the St Helens Active Citizenship group was formed, made up of local street homeless people and some living in temporary accommodation, with the express view of letting others know that the vote was their right

This group  has decided that it will continue to meet now  beyond the  registration date for this year’s general election  so that as many people who need to are made aware of their rights in  coming elections.  The group meetings have proved at times lively   but always seem to have left people with a sense of excitement that for the first time in a long time that their views and concerns might actually be listened to

The socially isolated group meetings have produced a sub group who are some of the wittiest best organised people either of us have ever met.

They went on from coffee mornings to form a stand-up comedy group that is now in its sixth month of active stand up in a local pub.